I no longer hold the textiles and archive from Tadek's studio but am selling some Beutlich textiles that other collectors have asked me to exhibit for them. I will be updating the website to remove purchase options on the items from Tadek's studio no longer in my possession. You can keep in contact with me via this website, the Vision Gallery Facebook page @VisionGalleryandStudio or email liz@vision-gallery.co.uk... Phone Liz on 07970 772063 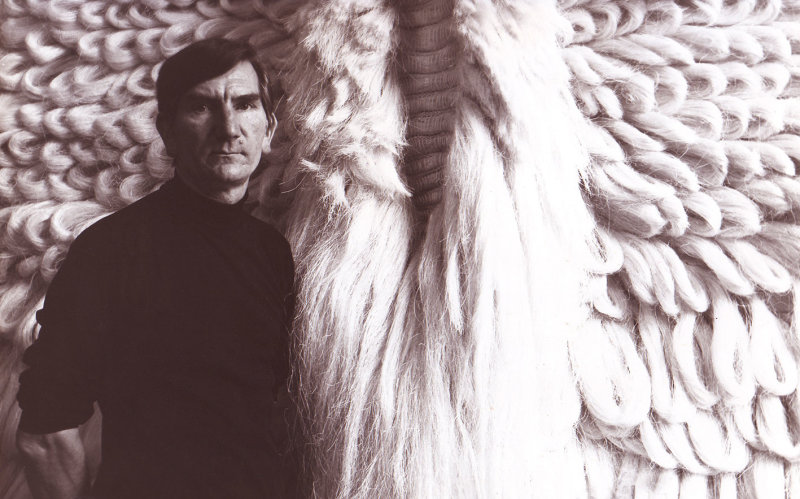 My connection to Tadek Beutlich started when my mother Fay Hankins became his assistant at his studios at Gospels in Ditchling, Sussex in 1968. I remember the fabulous high ceilings in the studio and Tadek’s colossal wall hangings strung from beams and extraordinary textiles growing on looms all around the room. Upstairs in the rambling old house, (Gospels was formerly the home and studios of Ethel Mairet), equally fascinating block prints were being produced by hand. Tadek Beutlich was a textile artist, print maker and teacher who wanted to encourage everyone who wished to learn to find ways of working without expensive equipment. Beutlich’s techniques were not inhibited by tradition and he invented extraordinary and unorthodox ways to express his visions.

His textiles vary from wonderfully vivid and large scale free warp tapestries and wall hangings which might contain wood, sisal, jute x-ray film or acetate, to more neutral fungus-like creations, which a myriad of natural and organic looking textures made with various techniques such as dipping cotton wool into a glue solution and then into paint. He abandoned the dyes that he used in his early days in favour of carpet threads, which he knew would remain bright and colourful without fading. In Spain, he used the esparto grass which grew outside his door to make the core of his fibre art and he loved its pliable nature and ability to hold forms. This was unavailable back in the UK, so he substituted wire, newspaper, sea grass, cane or whatever was available. He wanted to demonstrate ways or working that ‘ordinary people could think about’.
Beutlich’s print making started in the 1960s with the same unorthodox approach, using sections of tree cut from his garden at Orpington, Kent to make textural marks which are clearly distinguishable on many of his prints. Fencing, hardboard, foam plastic, leaves, lino were all among surfaces he exploited. He would literally walk on the prints in place of a press and he described how he ‘threw stones into a box-like thing and added a 4 inch roller to make an improvised press”. Fellow teacher and colleague at Camberwell Art School Michael Rothenstein nicknamed this stone filled box “the babies coffin”.

Tadek Beutlich’s textiles and prints are held in national collections worldwide in Sweden, USA, Australia, Poland and in the UK at the V&A, British Museum, Government Collection and many others including the Towner, Brighton & Hove Museum, University of Bradford, Ditchling Museum of Art & Craft, University of Chichester’s Otter Gallery, Folkestone Creative Foundation. His book ‘The Technique of Woven Tapestry' (1967) is still used as a textbook in textile courses worldwide.
Next
Previous